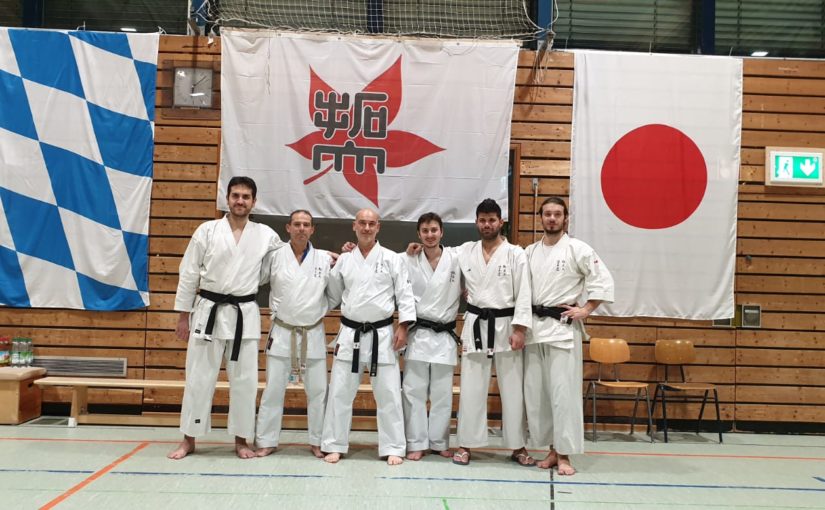 The good news is that all of us came back safely, nobody got lost in the Black Forest, or amidst the Swiss Alps (despite thick fog and heavy showers tried to make us lose our way). Even Marco came back to his cosy Swedish house, just in time to enjoy some fading sunlight, before sinking again in the deep darkness of northern winter.

The bad news is that the Takudai Seminar 2019 was… well, quite disappointing. Maybe because we had high expectations? Mmmh, maybe…

Honestly, our expectations were great: facing some of the most renowned names of Japanese karate-do brings both reverence and fright.

On Friday night, when we arrived, the official presentation had all the teachers standing as in a pantheon. Among them there were also their interpreters, plus a very mysterious character, coming straight from Tokyo, who we promptly renamed Yakuza-san.

The first training session, led by Murakami-sensei and Naka-sensei, wasn’t especially delightful: a lot of physical workout, but poor technical business. Just a warm-up, then, an appetizer for the next day!

Unfortunately, the next day, as we’ll hear later from the manager Andreas, an argument between Miura-sensei and Nagai-sensei (both of them ninth dan, eh?), messes up all the schedule. As a result, the whole seminar will be… cobbled together!

Miura-sensei ruled for the whole three hours in the morning, carving out a mild, nearly soporific pace. Times were very dilated, the workout was little and badly arranged, but, mostly, not fitting the average level of the practitioners. In conclusion, it was BORING!

Scarcely, Miura-sensei allowed some room for Naka-sensei. Who’s eager to teach, and very good at it. You can tell by the smile he’s got every time he explains something. Yet, he has one, big limitation: he’s Japanese, used to NEVER EVER oppose to hierarchy. So, when in the afternoon Miura-sensei took the lead back, he could only stay put and eat his heart out.

The writer still feels unbearable bitterness. The main reason is because, on that Saturday’s afternoon, the implicit deal between teacher and student was broken: even though you can’t speak your mind due to an overwhelming sensei, you ought to fulfill your teacher role all the same. You must stand by the disciples, until death if needed, show interest, interact, explain, walk-by, check, correct. In no case you can step aside and mind your own business. It’s a complete lack of respect for who’s standing there and, maybe, endured driving for hours and hours.

Of course, the same argument holds for those who left the seminar right after lunch break: they showed not to have a martial spirit residing in them. I won’t speak any names, that won’t be polite…

If the first two sessions went this way, you dear readers shall wonder, imagine the third one on Sunday morning!

Well, as a matter of fact, a group’s strength resides in its solidarity. When someone is a little gloomy, the group can cheer him up. And we, the KCK, are rather united, did you know? Group’s strength, then, is measured at the dining table, both Friday and Saturday night!

Seminar was bad? Never mind! Pork shin, beer and pleasant company will soon make it forget. The nice thing about KCK’s travels is this: collaterals, when you take your karate-gi off and wear daily clothes.

Another fundamental element when you travel abroad, is to meet new people. Like as Aiko-chan, for example, Watanabe-sensei’s translator: she is a very nice (and little clumsy ^_^) girl. Or even Yakuza-san, whose “OSSU!” will be remembered forever.

On Sunday morning Murakami-sensei and Watanabe-sensei took the lead. Among all, Murakami was the one with the clearest ideas: he followed his own schedule with method and discipline. Watanabe-sensei had a sparkling start; later she taught us an amusing game to improve quickness and reflexes, but at last… she got lost and had to improvise the rest of the lesson!

Therefore, what did we learn in this experience?

Technical matter, I’m afraid, not very much; rather, nothing. Human though, quite a lot.

We learned to evaluate people’s fragility; not to believe too much that a famous name means infallibility; and that, quoting Luigi Pirandello: «Being a hero is much easier than being a gentleman. A hero you can be only once in a while, but a gentleman must be all the time.»

As they say, keep always training, with passion and perseverance. Yes, right: as a water drop hollows a stone. In martial arts, sloppiness brings nothing.

So, be always critic. But, at the same time, compassionate.