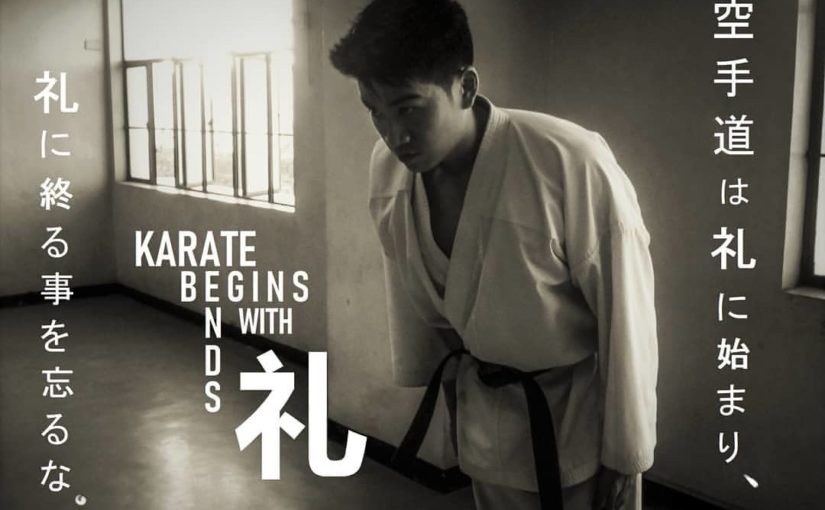 Since New Year has begun and we want to welcome it, I choose the salute as the topic of this post. Of course salute in martial arts: this is a karate-do website. It’d be weird to find something else, like as an article about the 100 most healthy recipes, wouldn’t it?

Ok, the starting point is a good place for a confession…

The first time I watched a karate training, I was about 13. I liked the idea, it’s been dawdling around my mind for quite a bit, but at that time I used to play soccer and the training days coincided, so I should have quit one to do the other. I didn’t want to, and then, that time, I went with my dad (these parents who can’t fend for themselves!), just for watching…

Maybe I should say that, as a teenager, I was quite a brat; well not really annoying, even nice sometimes, but for sure hostile to authority… as any youngster should be (parents, please forgive me!).

So, the first thing I saw in that training were the people (among them, my dad) aligned in front of the sensei, bowing and kneeling. Not to mention all the times when, in the span of an hour and half, they bowed each other or to nothing! “What the heck!?”, I wondered. “What are all those bows for?!?”

I know it can sound odd (nowadays, it definitely sounds odd for me!), but that thing was really annoying to me. If I ever decided to do karate, I said to myself, I’ll NEVER bow to anybody. Let them kick me out! I wanna see it…

There it is, my confession is nearly over. Since then four years passed, I fed up playing soccer and, that time for real, I began doing karate-do. I was even more… mature – not that much, just a bit – to accept the formality of the etiquette, bowing and saluting and all the stuff. Anyhow, it remained just that: formalities. Like when you tell: «Pleased to meet you» to a perfect stranger, but you don’t care at all…

The true importance of the salute, I realized it only years later. Many years later, when I was in a place far, far away. It was my first class and in front of me there stood about thirty boys and girls. Perhaps it didn’t really happen, perhaps it was just my suggestion, but the deference and respect with which those guys bowed to me, a perfect-Mr-Nobody-coming-from-Europe, hit me right in the chest. My own bow lasted a bit longer: in that way I meant the importance of that gesture. Since then, I took it as a habit: bowing for a few more seconds shows the person in front of me deserved my great respect.

The salute is like a parenthesis: it surrounds the beginning and the end of the training.

I won’t bother you with how to make the perfect Japanese-style bowing. First, because every school has (more or less) its own way to make it. Second, on the Web you can find as many examples as you like: mine won’t add anything new. And last, because the best way to learn is trying by yourself!

But I can write this: in the dojo we always say that salute makes you enter a different state of focusing: anything which doesn’t concern training should be left outside, troubles, anxieties, tensions and fears. The salute draws a straight line between us and the world outside, to help us to blank our minds.

Obviously, not everyone is a consummate Zen monk (well, I’m not for certain!) Thus, leaving behind the countless concerns of our daily life is far harder than we can conceive. You can go on and on with bows and zarei and stuff like that, but… many things don’t want to be dropped! At least we try, don’t we? Let’s then start from here ^_^

Anything else? Yes, something more…

Posture, balancing while sitting, our backs kept straight, precision of the gestures… All of this conveys control of our own body: a virtue that a good karate-ka develops and refines unceasingly.

Don’t forget that the kanji 礼 (rei) also means “thanks”, apart from “salute/bowing”. So: «Thank you for practicing with me. Thanks for helpin’ me improving!» Here’s the reason why, every time we face a classmate, we bow each other (when standing, it’s called 立礼 ritsu-rei).

One last thing: what is that strange noise karate-ka make when bowing each other, that sound like “oss”? Well, it’s a greeting typical of Japanese martial arts’ world. It can mean “Good morning”, “OK”, “I understand” and stuff like that. It’s considered very “manly” though, written as 押忍 (or simply おっす, pronounced ossu). Its origin may be traced to a shortening of the expression おはよう ございます (ohayou gozaimasu, a polite way to say “Good morning”). I could add a link to a wonderful article with more on the subject, but it is in Italian.

I bow to you and salute!